The COVID lockdown both in Nepal and the Netherlands has meant no travelling between the two countries which is why we were not in Nepal this spring. The board of the Himalayan Tiger Foundation (HTF) is, however, in almost daily contact with all our tiger conservation partners in Nepal, in particular the National Trust for Wildlife Conservation (NTNC), and in the Netherlands, through video conferences, skype meetings, phone calls and emails.

First, we are happy to inform you that all our Nepali and Dutch friends participating in our tiger conservation research programme are still in good health and able to continue their work.

Unfortunately Shyam Thapa and Ashok Subedi, both PhD students at Wageningen University (WUR), were unable to return home last April after their visit to Wageningen for study purposes. Their stay in the Netherlands will now last as long as the lockdown. Fortunately, Wageningen University is supporting them financially so that they can continue their work though we realise that their hearts and minds are with their families, friends and colleagues in Nepal.
Two Dutch MSc students from Wageningen University, who were working in Bardiya, had better luck. In early May they received permission from the Nepali authorities to travel during the lockdown period from Bardiya to Kathmandu where they could be safely repatriated to the Netherlands. It was a truly a narrow escape.

Grass Management in BNP
Two weeks ago we had an interesting video conference with Shyam Thapa and the supervising staff of Wageningen University about his PhD research on grass management in Bardiya National Park. He is making good progress and it is anticipated that he will be able to conclude his fieldwork at the end of the year. The preliminary data and results we have seen so far are very encouraging but some work remains to be done to complete the picture.
We will soon have the same session with Ashok Subedi about his research on Snow leopard and Blue sheep in the Phu and Nar Valley.

A meeting with Shyam Thapa and the staff of Wageningen University is also being planned to discuss the best way forward with the Electric Elephant Fence Project in the buffer zone of Bardiya National Park (Geruwa). Since the elephant fence was installed the damage caused by the wild elephants has decreased but the situation can still be substantially improved in some places. 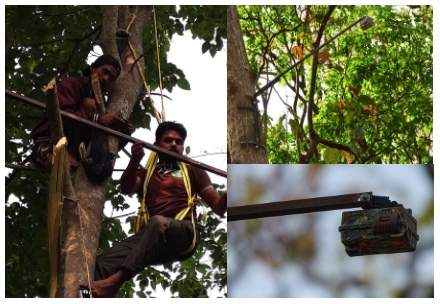 Since early summer of 2019 a network of 50 camera traps has been installed in the western region of Bardiya National Park. As in comparable situations in natural areas across the world the cameras are placed in a regular grid 1.5 km apart. Through the camera network all large wildlife is monitored continuously. Until now more than 10,000 detections of species ranging from deer to elephant and from otter to tiger have been collected.  The aim of the camera network is to better understand the distribution and abundance of deer, the main prey of the tiger. Specifically scientists can (i) study spatial trends, (ii) study temporal trends, and ultimately (iii) estimate prey density. Regarding (i) the camera traps will show whether deer are uniformly distributed or if deer are aggregated near, for example, rivers and grasslands. The latter can shed light on how strongly deer rely on the grasslands that are managed by PhD candidate Shyam Thapa. Regarding (ii), the camera traps reveal variation in deer activity over the day and season. If the network remains intact for years (which is the intention) then trends in deer abundance over time can finally be revealed: are deer numbers going down or not? The question is of course of great importance for the 2XT project. The last objective, estimating density, is the ultimate point of the study.
On top of the regular grid once the lockdown is over additional cameras will be placed on grasslands that are managed by Shyam Thapa. By comparing the camera trap detections in grasslands vs. forests, the importance of the grasslands as foraging grounds for the deer can be examined.
Unfortunately some of the cameras appear not to be fully waterproof – especially in the monsoon. The good news is that new and better cameras are now under way to NTNC and will arrive in Kathmandu shortly.

The extended stay of Ashok Subedi and Shyam Thapa in the Netherlands has been used to discuss the best way forward with respect to the ongoing research projects in Bardiya National Park and the Annapurna Conservation Area. Last week both PhD students met Professor Herbert Prins of WUR, and Cas de Stoppelaar and Frits Spangenberg, both board members of HTF. Long-term cooperation between NTNC, WUR and HTF, covering the period 2020 – 2026, is being proposed and to formalise this a draft Memorandum of Understanding will soon be forwarded for review to NTNC.

Human Pressure
The outbreak of the coronavirus, also in Nepal, is an extra challenge for nature conservation. NTNC director Siddhartha Bajracharya reports that the “human pressure on the National Parks in the south is increasing”.
Tourism in Nepal has come to a complete standstill, also in and around the National Parks. Poorer people in particular are suffering tremendously from having no income at all at the moment.  A debate is underway in Nepalese newspapers as to whether protecting people from the virus can outweigh the loss of lives through poverty and food shortages.
Ananath Baral, the warden of Bardiya National Park, communicated by phone that “poaching is still not so much a concern” but that there is an influx of people roaming through the park to collect firewood to cut their living costs.

Clearly there is still a lot of work to be done to save Southern Nepal’s nature from destruction especially at this time. This is why the board of the Himalayan Tiger Foundation greatly appreciates the continuation of all the research projects during these difficult times.
We are really looking forward to meeting all Nepali and Dutch participants in Nepal once the lockdown is over. We very much that hope that this will be possible as early as the autumn.

One response to “Tiger conservation in COVID times”