Groundwater is impossible to see but it plays an important role as abiotic factor for plants. Even more so for wetlands where the groundwater table is shallow. These wetlands play an important role in the conservation of the tiger in the nature reserves in the Nepalese and Indian Terai. More than a quarter of all the wild tigers are found in nature reserves along the Terai which is the zone at the foot of the Himalaya mountain range. Here, wetlands are found in the floodplains of rivers and usually covered by grass. This is where the tiger preferentially hunts for deer as their prey. Other grasslands may be further away from the river where they are usually the succession of abandoned agricultural fields.

The grasslands have been recorded as disappearing and we fear that they may become even more threatened by future changes in the continental and regional water systems of the Himalayan and Terai landscapes. Such changes include the construction of large irrigation canals or hydropower reservoirs but also large-scale gravel extraction from the river beds. The hydrological impact of such measures is not well known. Hence, there is a need to better understand the hydrology including the role of groundwater. 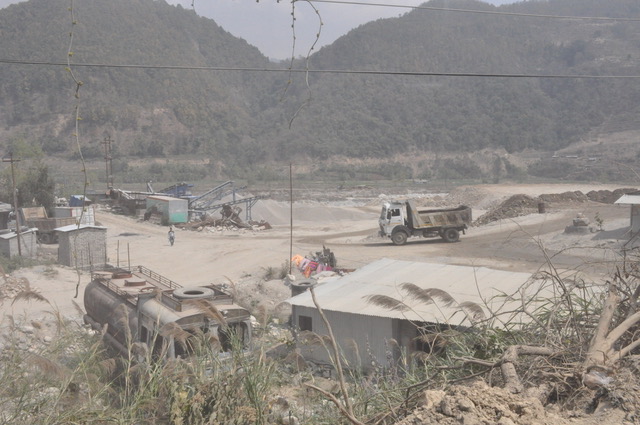 Groundwater
Before one can address the impact of future changes on groundwater below the grasslands, one must characterise the hydrological systems. First, you need to know about the permeability of the subsurface, what the depth of groundwater is, how it changes across the seasons and how easy rain or river water may infiltrate and where groundwater will exfiltrate in the surface water system. This is what is called hydrological system analysis.

Hanne Berghuis and Florian Knappers set out to study groundwater in Bardia NP in autumn 2018 and 2019, respectively. They collected a lot of information by sampling groundwater for lab analysis, measuring the drop in groundwater level following the monsoon, going to archives to obtain borehole descriptions and to characterise the unsaturated zone above groundwater in grasslands within the floodplain area and further inland.

Hydrological system of Bardiya National Park
The results show that the hydrological system is highly dynamic owing to the strong seasonality in rainfall thanks to the monsoon and the coarse, highly permeable layers of gravel and sand at a shallow depth. The monsoon climate also gives rise to major changes in the level of the Karnali River so the drop in water levels can easily be 1 cm/day in autumn. This is very high compared to other areas across the world. The area outside the floodplain is covered by a loam layer of several meters thick. This layer is not very permeable so the monsoon rain cannot easily penetrate into these soils. A part of it will flow as overland flow towards gullies that have been eroded through the loam layer down to the sand and gravel layers. Here, small, ephemeral streams are found which may recharge the groundwater. Based on lab analysis of groundwaterwe can also recognise that most groundwater in the park originates from rain. However, infiltration of river water occurs in the agricultural fields in the buffer zone adjacent to the park owing to irrigation via canals that bring the river water inland.

Hydrological modelling
Hydrological computer models should be built in order to sort out the effect of future changes in the continental and regional water systems on the groundwater below the grasslands. First, we need to know the subsurface characteristics in more detail and we want to study the changes in groundwater level during winter, spring and monsoon. From that, we can model the current hydrological situation and subsequently we can perform predictions.

Now, we have only addressed autumn. So important steps have been made in studying the groundwater at Bardia but still there  is work to do. We are grateful to the students who did a great job during their research projects in the national parks. Fortunately they enjoyed it a lot and also acquired valuable insights into the field aspects of hydrology.