Since early summer of 2019, a network of 50 camera traps has been installed in the western region of Bardyia National Park. Similar to comparable investigations in natural areas across the world, the cameras are placed in regular grid, 1.5 km apart. Through the camera network, all large wildlife is monitored continuously. Until now, more than 10,000 detections of species ranging from deer to elephant, and from otter to tiger have been collected. 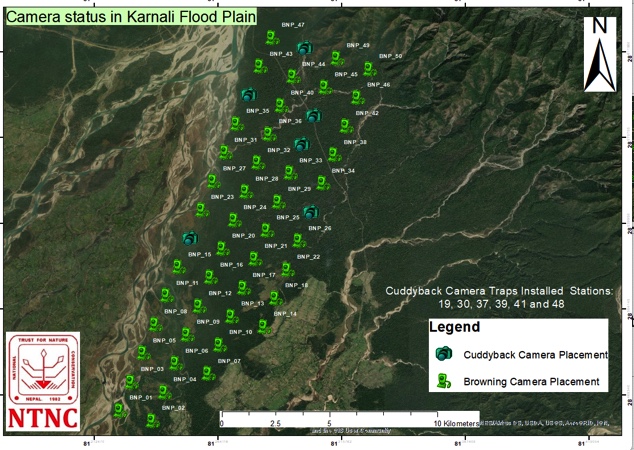 The objectives of the camera network are to better understand the distribution and abundance of deer, the main prey of the tiger. Specifically, with the cameras scientists can (i) study spatial trends, (ii) study temporal trends, and ultimately (iii) estimate density.
Regarding (i) the camera traps will show whether deer are uniformly distributed or if deer are aggregated near, for example, rivers and grasslands. The latter can shed light on how strongly deer rely on the grasslands that are managed by PhD candidate Shyam Thapa. Regarding (ii), the camera traps reveal variation in deer activity over the day and season. If the network remains intact for years (which is the purpose) then trends in deer abundance over time can finally be revealed: are deer numbers going down or not? This question is of course of great importance for the 2XT project. The last objective, estimating density, is the pinnacle of the study.
By comparing the camera trap detections in grasslands vs. forests, the importance of the grasslands as foraging grounds for the deer can be examined.

Camera trapping
Camera trapping comprises a widely-used monitoring technique for wildlife density assessments. Despite wide acceptance as one of the most efficient methods its performance is still hampered by varied factors. 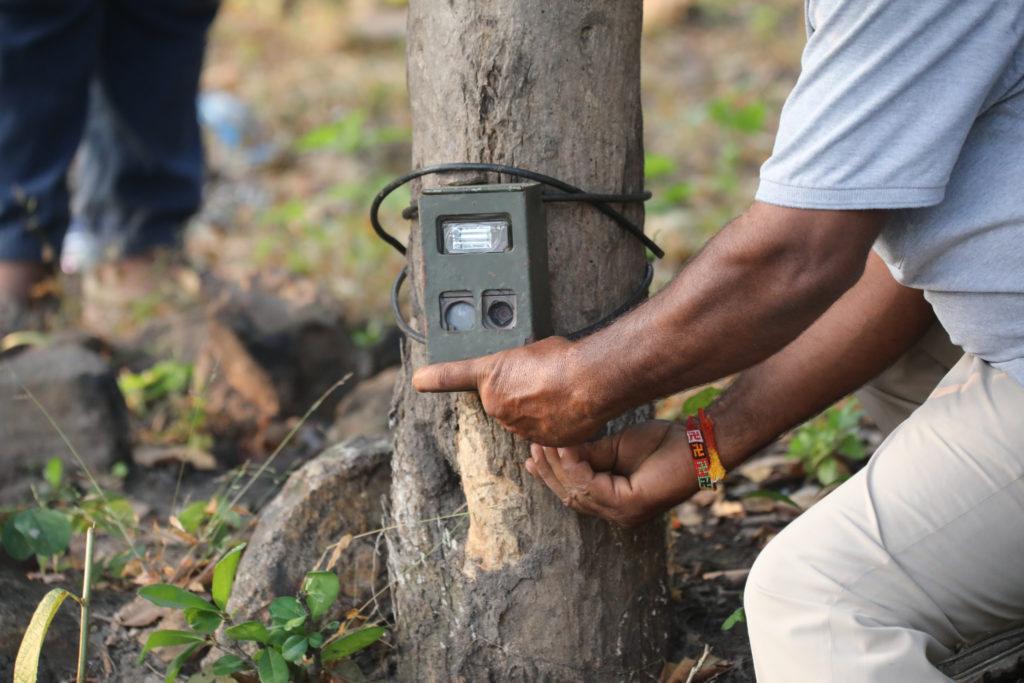 Camera trapping in its most conventional form is characterized by cameras that are horizontally placed at a height comparable to the target species’ average height. Previous research has shown that wildlife detection chances in horizontal camera trapping are influenced by factors such as temperature, vegetation, detection distance, body size, and speed, somehow causing what I call camera “mood swings” which is when the camera  fails to trigger when it should do or triggers when it should not. Since such cameras trigger on “heat in motion” if the target species’ temperature is similar to the background surface temperature, detection chances might be compromised. Similarly, the smaller and the faster the target species, the lower the detection chances. Vegetation density and detection distance are also other factors to consider ultimately making data corrections complicated and somewhat unreliable. 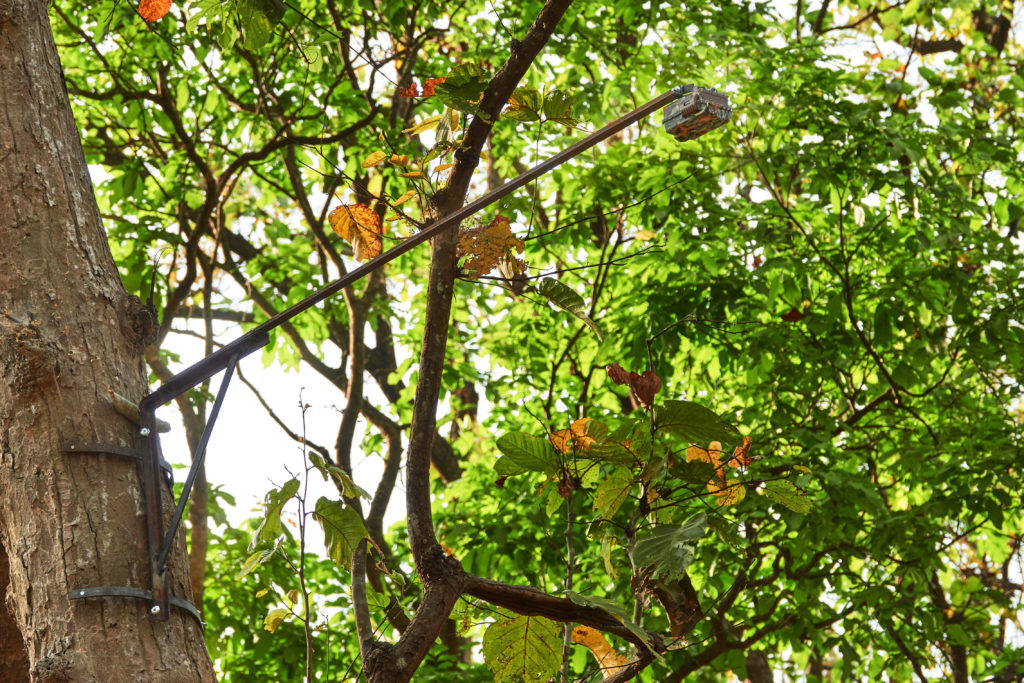 Given the novelty of the method I aimed to find out if the vertical cameras presented the same “mood swings” as their horizontal relatives given the same conditions. In other words, I tested for the influence of temperature, vegetation, body size, and average speed on the performance of vertical cameras, more specifically on the detection success rates and on the detection area, two indispensable parameters used to estimate wildlife densities with camera traps. In general terms I aimed at collecting information that could enable a more-informed discussion about the real added value of this innovative camera setup and help us to reflect on whether vertical camera trapping can be considered a valid alternative method to its widely-used sibling.

Set up
I realised that the only way I could safely assume that a missed detection had occurred was by witnessing it with my own eyes. So I conducted supervised experiments on cameras with a similar setup to those in the national park (8 metres high in the canopy) right in the backyard of the Bardyia’s NTNC headquarters. To test the influence of body size I used subjects with strikingly different body sizes such as a domestic chicken, a domestic goat, myself (a human), and finally an Asian elephant. 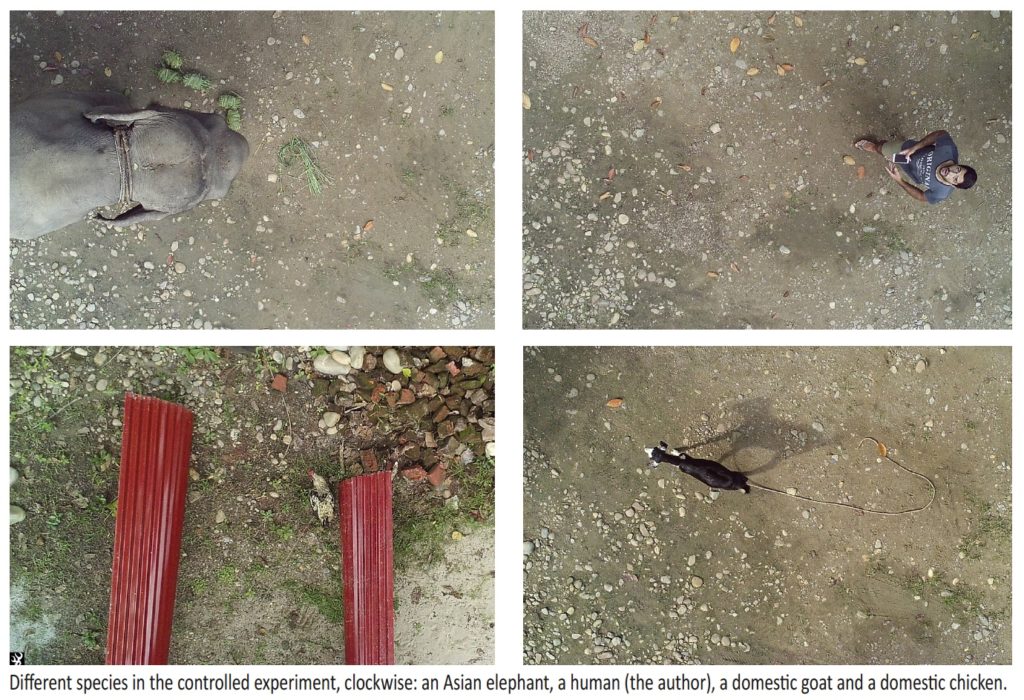 I defined two specific routes for the experiments with the camera one crossing the frame horizontally (180º) and one vertically (90º). I conducted the experiments at different times of the day to sample a representative array of temperatures and planned for different average speeds of the animal, the normal commuting speed and the running speed. The detection success rates and the area of the frame where the subject was first detected (detection zone) comprised my metrics to assess detection accuracy.

Arrival at Bardyia National Park
At first it was quite a challenge to understand the logistics implied in these experimental tests. In my head everything was clear and easy when I arrived in Bardyia.

But I soon realized that the animals despite being used to people had their own free will and did not follow my instructions as precisely as I had expected. What’s more deploying the cameras at a height of 8 metres is not as easy as it may seem. Suddenly I was required to think as an animal sociologist, a civil engineer, and a professional tree climber. Fortunately I was able to call on the help of experienced professionals in these varied areas and finally produce some solutions. I used metal structures to define the aimed trajectories to be used by the animals, I was lucky enough to get a helping hand from the NTNC technicians Biru, Ramraj and Suman to deploy the new cameras, and finally the help of the NTNC elephant whisperer (local Mahut) with the manoeuvring of Asia’s biggest land mammal in the trajectories I needed. In the end I was able to analyse thousands of pictures from the experiments and Bardyia’s camera deployment and see if the results were consistent.

Initial results
The experiments showed that body mass and average speed affect detection probabilities in line with several studies using horizontal cameras. While the elephant was detected 100% of the time, the chicken was rarely detected. Moreover higher speeds related to lower detection rates with increasing magnitude in smaller animals; the small chicken was never detected at higher speeds. By contrast, temperature did not present significant effects within the observed range which was a clear positive point when put in perspective with studies in horizontal camera traps.
The detection area also proved to be defined by the interplay of body size, temperature, and speed (and possibly other factors that were not tested). Since the detection area is a more sensitive metric than detection success which is composed of more levels of variation, it clearly showed the effect of the above-mentioned factors. Increasing temperatures as well as high speed and low body mass were shown to be related to smaller detection areas.

By analysing thousands of images from Bardyia’s camera deployment I was able to see overlapping patterns with the experiments for instance the effect of temperature and body mass on the detection area. The field data also gave me insight into another factor that was not accounted for in the experiments, vegetation density. Higher vegetation densities led to smaller detection areas demonstrating the blocking effect of vegetation on the infrared radiation coming from the subject’s body.
As to false triggers, temperature and canopy cover affected the number of false triggers while vegetation density did not. This contradicts the common idea that vegetation clearing is an effective way of decreasing blank images. As an alternative the placement of cameras may better prioritize areas with higher cover to decrease the number of blank images that disrupt many camera trapping studies worldwide.

Main implications and recommendations
In comparison with horizontal cameras the vertical method presented a lower risk of damage and theft as there was not a single case of damage by wildlife or people. It also proved to be potentially less impacted by vegetation and temperature (within the tropical temperature range studied). As there is less variation in the distance between the target species and the camera, and less variation in the size of the detection area it is substantially easier to make corrections and thus to get reliable density estimations. That being said and while still acknowledging the prevailing challenges, I believe that there is enough evidence to consider vertical camera trapping as a valid alternative method to its widely used sibling technique.
The results of this study do not indicate any big constraint for the tiger prey-base monitoring being conducted in Bardyia National Park. As the body mass of ungulate species such as the wild boar, hog deer, chital deer, swamp deer, and sambar deer (main tiger-prey species) is comparable and most likely higher than the goat used in the experimental setup, I predict detection success rates above 70%. Yet some of these species prefer habitats with dense understory which may require a more cautious analysis to avoid underestimations of certain species.
In the wider context of vertical camera trapping studies I would recommend that camera deployment heights should increase depending on the target species’ size and speed since this would increase the time of exposure to the sensor and maximize detection chances. I also recommend the use of data subsets from cooler periods (colder season or night-time) as an alternative in climates characterized by high temperatures.

From Bardyia to the world
The study demonstrated that by using controlled experiments and corroborating field data we can derive new insights not only into the vertical camera setup of Bardyia National Park but into many other camera trapping studies worldwide. It revealed several somewhat hidden detection patterns in vertical camera trapping, which enable us to take a critical look at the outputs. Once we understand these detection preconceptions we can correct for their influence. Further empirical research in vertical camera trapping is needed to accurately assess how these confounding factors quantitatively affect camera performance and finally be able to make the corrections needed.
In the wake of the technological revolution of the 21st century tools like camera traps will have an ever-increasing importance in wildlife monitoring. In envisioning accurate wildlife density estimations it is important to strive for technological advance as well as a better understanding of the possible shortcomings of these modern tools. Machines have been shown to outperform humans in various tasks but their outcomes still need to be looked at critically.

The present study and many others were only possible thanks to the cooperation between the National Trust for Nature Conservation, Wageningen University & Research and the Himalayan Tiger Foundation, which enabled more informed decision-making about wildlife monitoring and confirmed the position of Bardyia National Park as being at the forefront of wildlife research.