irst of all, we wish you a prosperous New Year and we hope that 2021 will also lead to further success for nature conservation in Nepal. In the dark gray 2020, which is behind us, some things have been extremely difficult due to ‘Covid-19 constraints’, but still…

a number of positive developments:

Grass management
In 2020, Shyam Thapa of the National Trust for Nature Conservation (NTNC – our counterpart in Nepal) was able to continue his research on better grass management in Bardiya National Park (BNP). Shyam is doing his PhD in Wageningen with Prof. Herbert Prins, financially supported by the Himalayan Tiger Foundation (HTF). The results look promising. Shyam is on track, despite the virus pandemic that is also seriously affecting southern Nepal. It looks like he will be able to complete his PhD by the end of this year.

The central question in his research is: what is the effect of mowing (if so, with what frequency?) and fertilization (if so, with which substances in what quantities?) on the growth of suitable grass species for deer, which can serve as prey animals for tigers?
It is expected that on the basis of his research, concrete recommendations can be made to improve grass management in the Bardiya National Park.

Tiger’s prey base
In addition, research into prey density in Bardiya has continued, thanks to the efforts of Rabin Kadariya and Umesh Paudyal of NTNC. How many deer are there? In which places, and when? Currently, the images recorded by the ‘hanging cameras’ (looking down vertically from a tree) are being studied.
The counting of prey on the camera images is automated. To identify the various animals, we are using machine learning algorithms. Moreover, if it is also possible to identify and follow Chitals individually – based on their unique dot pattern on their backs, which show on the images – so that the density of this main prey animal can be estimated with greater accuracy. 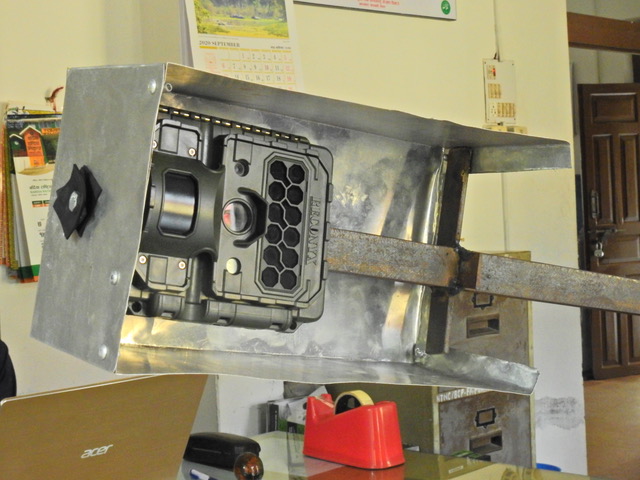 To identify the various animals, we are using machine learning algorithms. Moreover, if it is also possible to identify and follow Chitals individually – based on their unique dot pattern on their backs, which show on the images – so that the density of this main prey animal can so be estimated with greater accuracy.
(photo: camera with rain cap)

Snow leopard
The investigation of the snow leopards (photo on the left) in the Manang area by Ashok Subedi is also continuing. He investigates in the high Himalaya’s the implications of available resources and landscape dynamics on these animals, by using ‘artificial snow leopards’ (photo on the right) and it’s most important prey animal: the bharal. He is trying to get a better understanding of the role of the environment in maintaining body temperature of these artificial animals in the extreme climate conditions.

The Covid19 epidemichas made it difficult for Ashok to enter the area. His attempts to read the chip-stored data from these fake leopards installed in Manang were stopped by locals for fear of Corona contamination. You must show a ‘negative PCR test’ to be allowed to enter the Annapurna area as a government official. As two members of Ashok’s team turned out to be positive, they were not allowed to travel and the team stayed in Pokhara.

NEW CHANCES
It was difficult to accept that we could not go to Nepal last autumn to visit our research area’s in situ and in vivo. The chances for this spring do not seem rosy either. This does not alter the fact that the following topics are on the agenda.

Human tiger conflict
An important point of attention is the growing Human Tiger Conflict (HTC). The ‘2xT project’ (Double the Tiger Number) in Bardiya National Park is increasingly generating problems for people living in that area. It is sad to learn that over the past year a number of them have been attacked by tigers, some of them fatally.
2xT therefore has its drawbacks. How should this be dealt with? Simply removing people from the area is not an option. Which measures can be taken? With our counterpart the NTNC – as well as with WWF – we are discussing how to tackle this problem, taking into account the local conditions, such as the level of support of the local population and the infrastructure.
In a next newsletter we will inform you about our efforts to give more attention to this problem.

Climate change
North India and South Nepal (the Terai) are heating up quickly. This also applies to Bardiya National Park. The question is therefore whether BNP will remain thermally suitable as an important tiger reserve in the long run. To answer that question, heat sensors (‘black spheres’) are fitted to the hanging cameras, which will record the air temperature and heat radiation for an entire year, so that we can understand the thermal landscape better.
Can tigers and other animals cope with higher temperatures? If not, what could be a solution? See: Black globes for Nepal.

Radio collars on snow leopards
In addition, the plan is to provide a number of snow leopards in Manang with radio collars, in order to follow the movements of these shy animals as well as we can. This research will be part of Ashok Subedi’s PhD research.
See: distribution and use of the landscape of predators and prey in Nar Valley

NWA
A bright point on the horizon is the contribution of the Nederlandse Organisatie voor Wetenschappelijk Onderzoek (Dutch Research Council – NWO) in the context of the Dutch Research Agenda (Nationale Wetenschap Agenda – NWA) to the forthcoming research program of Prof. dr. Jasper Griffioen in Utrecht, entitled: ‘Save the Tiger! Save the Grasslands! Save the Water!’
The aim of this research program is to investigate the geology and hydrology in the Terai (such as groundwater levels) in relation to the ecology of the area, which – as we hope – will lead to better measures for nature conservation.
The contracts with NWO will be signed in the coming months. We are going on the assumption that we can start this large Dutch – ground-breaking – research program, which was partly initiated by us, in the second half of 2021.

A small – abstract – foretaste of this research program can be found in the following diagram. Rest assured that we will come back to the content in detail in the coming year. 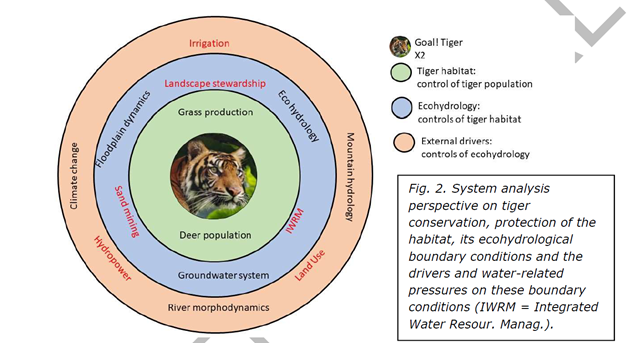 So far for our first newsletter in 2021. There are interesting plans, the cooperation with NTNC and the government of Nepal is excellent, and we continue to count on your support, both substantively and financially. Thank you so much!